April 20, 2017/By/Innews/Comments Off on Opanka Spotted On The Streets Cleaning Car Screens For Money 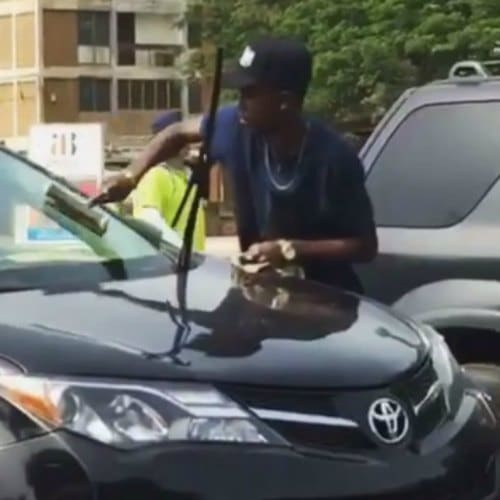 Dadie Opanka was seen earlier today on the streets of Tema washing people’s car screens. The reason remained unclear until he posted a live video on his facebook page captioned:

“It’s TRUE many musicians don’t have Money, so I have started Wiping ppls Car Screens in order to get some MONEY to shoot my New Song #WeddingCar Video… hmm at least it’s better than stealing… God is involved”

The song “Wedding Car” is being played under almost all marriage ceremonies and its becoming people’s favorite, it’s currently No.2 on #AdomAirtelTop20 Songs in Ghana.

Opanka’s new style for raising funds to shoot “Wedding Car” video deserves praise nonetheless but leaves much for others to ask: Is it a new way to intereact with fans? Or is it a dedicated effort to promote morality in society?