Ghanaian Producer Eyoh Soundboy is in a critical condition, he’s on dialysis - Wife

Ghanaian Producer Eyoh Soundboy is in a critical condition, he’s on dialysis – Wife

July 13, 2021/ByRichard/Innews/Comments Off on Ghanaian Producer Eyoh Soundboy is in a critical condition, he’s on dialysis – Wife 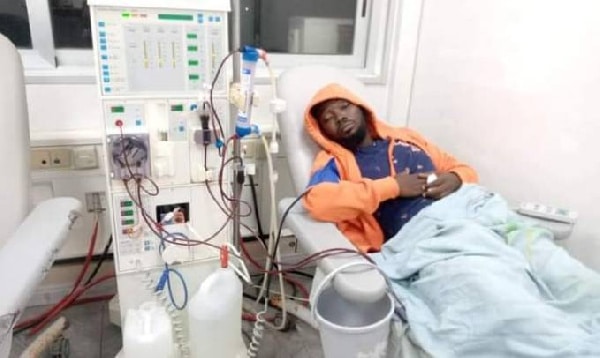 Wife of sound engineer Eyoh Soundboy, Aisha Yussif, has disclosed on Rainbow Entertainment show on Rainbow Radio 87.5Fm that her husband is currently in critical condition but it has not reached the point where he would need a kidney transplant as speculated.

Speaking to sit-in host Summy Brown she said her husband has not been well over the past five months and was treated for several conditions including, malaria, typhoid, fever until he was recently diagnosed with kidney failure.

She indicated that her husband is currently on dialysis.

She also disclosed that someone recently called asking to donate his kidney to the sound engineer should he require a transplant.

Aisha Yussif stated that currently, the cost for his treatment has not been approved because it is not certain that he should get a transplant.

The family, she said, wanted to keep this private but some industry players including, comedian David Oscar have started a campaign to seek funds to support him after he sought permission from the family.

According to her, some industry players are supporting the family financially after they got to know of his condition.

”He is in a critical condition because four days ago, we rushed him to Yeboah Hospital in East Legon but they did not have the facility to cater for him so we had to rush him to Korle-Bu.”