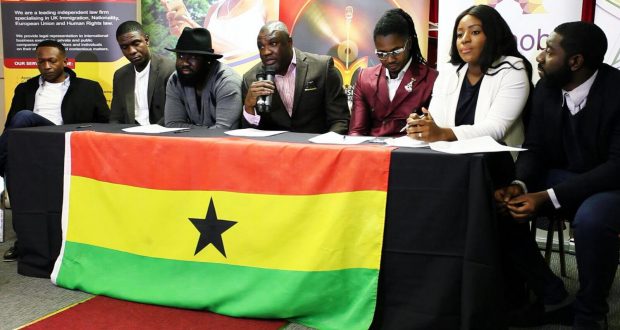 Preparations for the Ghana Music Awards UK (GMAUK) 2017, are already underway and organisers are confident that this year will be bigger and better than last year. The awards ceremony is billed for September 9th 2017 at The Splash Gaumont Palace, formerly Dominion center, The 9 Broadway Woodgreen, London N22 6DS.

At a brief press conference announcement which was held at STARR UK Multimedia premises in Croydon, South London, one thing was clear, this year’s ceremony will feature more glitz, more drama and the biggest Ghanaian celebrities all assembling at the event.

Seated on the high table were Alordia, Emelio, Nana Slick, Tracy and Mimzy to outline the whole event, as they mainly touched on the plans for GMAUK 2017, and how better it will turn out.

Speaking at the press conference, Alordia, the CEO, said they are pleased to be hosting the event once again. He admitted mistakes in the previous event, but promised an improved one this year.

The General Manager, Nana Slick, told the media that, musicians, music industry practitioners and members of the general public that nominations for the 2nd edition of the award ceremony has officially been opened and will be closed on 30th May 2017.

Artistes whose works fall within April 2016 – April 2017 should send their works to [email protected] or visit www.ghanamusicawardsuk.com; also a form will be made available on the official GMAUK 2017 website too.

Tracy, the administrator for GMAUK 2017, said organisers would ensure the GMAUK 2017 remain exciting and relevant this year.