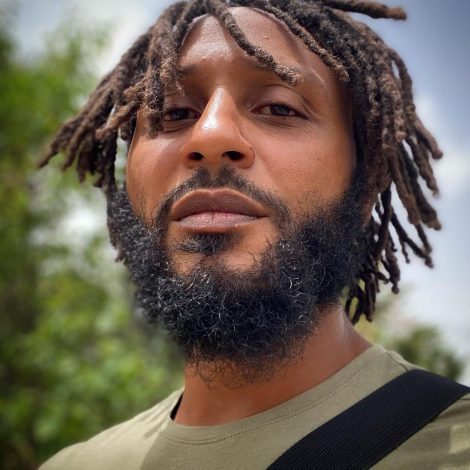 Wanlov the Kubolor was born in Romania and grew up in Ghana. Raised in a home where both parents were avid collectors of music and other forms of eclectic art, it is no wonder the Kubolor has a unique perspective on life, a worldview evident in his insightful consciousness, and empathetic presentation of the human condition.

Hailed as one of the most refreshing and original artistes of the times, this well-deserved distinction is largely due to his decision to buck the current trend of his generation and live out his true roots. Kubolor’s love and respect for nature is felt not only in his music, which is delivered in his melodic accent, but also in his hallmark sense of style which is organic at its core. This choice to be unique has resulted in him being embraced proudly by a new generation of people the world over for his authenticity and flair. For his diverse fan base, the Kubolor reaches them not only sonically, but also culturally and visually, a combination held together by his own special and highly appealing brand of consciousness.

Kubolor, true to his support of authenticity, is the flag-bearer of the Ghanaian-based production house Pidgen Music, a label headed by Panji Anoff, a guru producer who played a major role in the birth of Hiplife through Reggie Rockstone and the Hiplife group Talking Drums and still plays a major role on the Ghana and World Music scene with artists like King Ayisoba on the Pidgen Music roster.

Out of Wanlov’s musical and personal experiences, he has succeeded in creating a space to share his art comfortably. In refusing to modify his versatile style to fit the mould of pre-existing genres, Kubolor hopes to inspire others to create a personal evolutionary path for positive change.

Wanlov’s widely acclaimed versatility is heard on his debut album “Green Card”, released in 2007 on his return to Ghana after a 7-year stay in the USA. Being nominated at the 2008 Ghana Music Awards for “Discovery of The Year”, “Record of The Year”, “Video of The Year” & “Hip Hop Song of The Year”, shows that Kubolor’s contribution has made a strong impression on his people. Already being referred to as a classic in less than a year since its release, Kubolor’s debut album, “Green Card”, went on to capture the hearts and minds of the people the world over.

On any given day in Accra, Ghana’s capital, it is likely that you might see the barefooted, skirt-clad Kubolor; walking about alone or with fellow musicians and playing his two koshkas (pendulum shakers) or his atenteben (bamboo flute) as his fans, both young and old, listen, dance and sing along. Undoubtedly, Wanlov the Kubolor is happiest amongst the people he says inspire him to be the truest version of himself.

Though at home with his fans, he is also no stranger to the company of internationally acclaimed musicians. Wanlov the Kubolor has had the honor of collaborating with Gyedu-Blay Ambolley, Ghana’s Rap pioneer / Highlife legend, and Reggie Rockstone, the Godfather of Hiplife, amongst other well respected artists worldwide.

His flair for the extraordinary has netted him wide acclaim and, in this well-earned popularity, Kubolor was recently chosen as one of only five artists to represent Africa as a lyricist/songwriter in the “Routes to Roots” project. A collaborative initiative conceived by Bigga Fish, a UK-based organization that engages young people through creative mediums, “Routes to Roots: Bamako” is an educational music project with about 20 artists, carefully selected from Africa and the UK, to record an album that represents a nice slice of the cultural spectrum.

No doubt, Wanlov’s music is stimulating to hear, but it has been said that the Kubolor’s special brand of music is best experienced in a live show. True to this statement are the phrases used by Kubolor concert goers in universities, theatres and clubs throughout the United States, the U.K. and West Africa. “Beautiful”, “He made me cry”, and “Dope lyricist!” are likely to be heard as people describe their experiences at his shows. His eclectic musical style has blurred the lines of creativity and mass appeal. Testament to this is the worldwide radio play he currently enjoys. Indeed, interviews on college radio stations, national news media and the BBC World Service show that Kubolor’s music crosses all boundaries, real or imaginary.

According to Wanlov, his ability to appeal to all people and to relate to the broad spectrum of the human experience is a result of growing up between two worlds. He speaks candidly of his Ghanaian and Romanian parentage, which created him as a person too light to be seen as African and too dark to be considered European. His experiences as he sought to navigate an existence in these two worlds, neither of which fully claimed him, influenced him to write “My Skin” and the award winning song “Human Being” which has the distinction of not only winning the 2006 WCS International Song Contest, but also serving as the soundtrack to the anti-child trafficking campaign led by UNICEF and the Ministry of Women and Children’s Affairs in Ghana.

Wanlov the Kubolor, an authentic individual, is a true rascal and a self styled adventurer. As a listener, his life-force, pure talent and lyrical skill will engage you as he entertains, informs and shares. As the nexus of Pidgen Music, the Kubolor is adamant and true to his desires to positively impacting the quality of life for all.