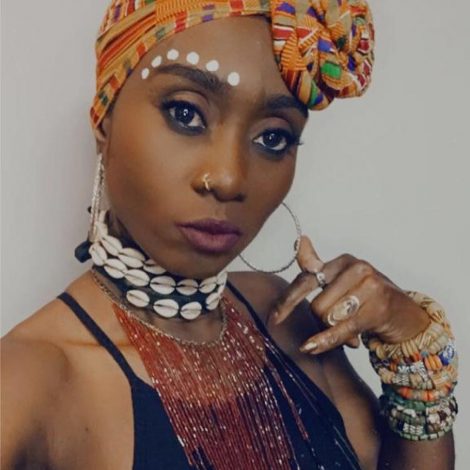 Nana Yaa Thomas is a Ghanaian Hi-life, Afro and Neo soul singer, songwriter and performer. She was born in Ghana but has had life experiences across different parts of the World, ranging from Liberia, London and USA.

Her personal life is described as: ‘’Imagine a butterfly trapped in a cocoon, using all its might to break free, its wings forming radiant colors caused by the sheer will to live.”

Imagine a young woman breaking free from the ravages of war, deprivation and abandonment, but instead of wings, she emerges with a voice so distinct it grabs your heartstrings; and here you have the story of Nanayaa: a woman of life, love and compassion.

In the mid eighties Nanayaa visited Liberia and got caught up in the war. She returned safely to Ghana in the early 90s of which within that same period she met Jonathan Opoku popularly known as Jon K, a producer and a musician, who mentored her until his untimely death.

Nanayaa’s exceptional voice and star quality seized the awareness of many celebrated and distinguished musicians including the Western Diamonds Band, Nat Brew (Amandzeba), Rex Omar and Kojo Antwi whom she has worked with extensively on several albums and musical concerts.

She has also recorded and shared stages with a number of the greats in African music such as Osibisa (Ghana), Miriam Makeba (South Africa) and Sonti Ndebele (South Africa).

.
3. NanaYaa has performed on many stages in and out of Ghana.
• NanaYaa was the only performer at the Re-launch of Millicom Ghana telecom giants – Tigo.
• She has performed at the Glitz Fashion Weekend & Awards – Twice in a roll.
• Performed with Nigeria’s 2face Indibia at Angel Ball – Alisa Hotel
• Celebrated Teddy Osei at 80 (Founding Member of Osibisa Band) at +233 Jazz & Grill Bar.
• Ebo Taylor birthday at +233 Jazz bar
• Club LIVE – Hilife show at +233 Jazz & Grill Bar
• She is known for her support behind the Music Maestro Kojo Antwi on every 24th Night.
• Leukemia Awareness Concert 2006, and the recent Centenary Celebrations of Dr. Kwame Nkrumah 2009.
• Many more

• Currently Nanayaa, has her three songs to her credit; Ego Be, Handkerchief and Biaku ye.
• She is about to release a seven track EP for her fans this September.
• Second single out titled: ‘HANDKERCHIEF’ features Dancehall artist, performer and songwriter Samini and produced by Kwame Yeboah


• Her first single “E GO BE” got her a nomination at the 2016 Ghana music awards less than 6 Months of release.

With a voice like hers, with a passion for music that runs through her veins and a stage rocking excellence Nana Yaa is just starting.

• Her debut album, which she recorded with multi-instrumentalist, producer, songwriter and singer Kwame Yeboah and Genius Selection is scheduled for release by the end of the year.
• Set to tour the country – Ghana with her Silhouette Concert from Accra, Takoradi, Kumasi and Koforidua.
• She will be touring USA and should continue across the rest of Europe in 2017 starting January.
Like the saying goes, ‘better late than never’ hence she is here to stay and to thrill music lovers across the world with good authentic Ghanaian music.

So if you love good music, then join her in sharing her message of life, Music, Faith and Love through music.