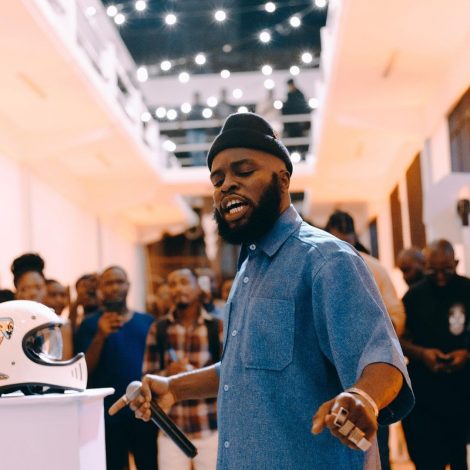 M.anifest (born Kwame Ametepe Tsikata, November 20, 1982) is an award winning Ghanaian rapper and songwriter. He has worked with the likes of Damon Albarn, Flea, Tony Allen, Erykah Badu, and is featured on five songs on the Rocket Juice and The Moon album. He is the grandson of one of Africa’s foremost ethnomusicogists and composers J.H. Kwabena Nketia.

In 2012, BBC’s arts program The Strand (radio) tipped him as one of four acts to look out for in 2012. M.anifest won Best Rapper of the Year and Hip-Hop Song of the Year at the 2013 Ghana Music Awards after having been nominated twice in 2012 and thrice in 2013. In 2015 M.anifest’s single “someway bi” earned him a third place honor in the International Songwriters Competition (ISC). In the same year The Guardian named M.anifest as “the foremost rapper on the continent.”.  M.anifest currently lives in Accra (Madina) and Minneapolis.

M.anifest is the Son of Ghanaian lawyer and academic Tsatsu Tsikata. M.anifest migrated to the Twin Cities (Minneapolis-St Paul) in 2001 to attend Macalester College where he graduated in 2005 with a BA in economics.

In his time in the Twin Cities M.anifest learnt to adopt the do-it-yourself credo and the know-how in becoming an independent musician. He released his first solo album, Manifestations, in 2007 funded by royalties he received from lending his voice to a Pepsi jingle that played nationally on U.S radio. Manifestations earned him Songwriter of the year Honors in the City Pages as well as top five albums of the year recognition in the Star Tribune. In 2009 he released a free album, the Birds and the Beats, to raise awareness and funds for the work of a non-profit, Young Entrepreneurs Africa.

He released his sophomore album “Immigrant Chronicles: Coming to America,” in September 2011 which included the singles “Suffer,” “Asa,” and “Blue (Chale What Dey Happen). It marked a decade of his life in the U.S and the beginning of his transition back to Ghana. In 2012 M.anifest began making major inroads in Africa performing on The Big Brother Africa stage as well at the Channel O Music Video Awards in South Africa. The video for his single “Makaa Maka” also got him nominated for Most Gifted Hip-Hop Video at the 2012 Channel O Music Awards and won him Best Hip-Hop Video at the 4syte Music Video Awards.

M.anifest has had an eclectic creative output; he produced and co-wrote an independence mini Hip-Hopera for Channel O and also performed a highly praised piece, at the first ever Ghana Music Week, detailing the history of Ghanaian music. M.anifest is co-founder of Giant Steps, an interactive conference for entrepreneurial creatives and creative entrepreneurs. He’s also featured in the feature-length documentary We Rock Long Distance by filmmaker Justin Schell.