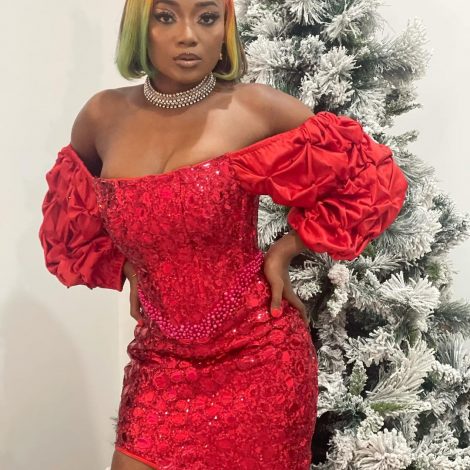 Jane Awindor , better known by her stage name Efya, is a Ghanaian neo soul vocalist, songwriter,performer and actress from Kumasi. She is the daughter of Nana Adwoa Awindor, a filmmaker and celebrity host of the late television show Greetings From Abroad. Efya got her first exposure to fame when she participated in the maiden edition of the Stars of the Future talent show.She won the Best Female Vocal Performance category at the Ghana Music Awards in four succession, beginning in 2011. Moreover, she was applauded for her performance at the 2013 Africa Magic Viewers Choice Awards.

Her debut mixtape, T.I.N.T., was released on November 11, 2013; it consists of songs that were released between 2011 to 2013. The mixtape was supported by the singles “Getaway” and “Best In Me”. On April 22, 2016, she released her long awaited debut studio album Janesis. It was previously scheduled for release at different times between 2013 to 2015. “Forgetting Me”, the album’s lead single, was released on January 11, 2014. On May 8, 2016, Efya was announced as one of the newly signed acts to Wizkid’s Starboy Entertainment. The announcement came following Wizkid’s performance at the Ghana Music Awards.

Efya was born in Kumasi, Ghana. She has two brothers and a sister; she obtained her secondary education from Yaa Asantewaa Secondary School. She relocated to Accra when her mother enrolled at the NAFTI film school. Efya received voice trainings from some of her family members at a young age. She graduated with a degree in theatre and music from the University of Ghana. In 2008, she gained national acceptance throughout Ghana by becoming the first runner up in Charterhouse’s Stars of The Future television show. She lost to Irene Logan, but secured herself a three-year recording deal. The recording deal enabled her and Irene to do a collaborative album titled Unveiled, which was released in South Africa. Following the conclusion of her recording deal with Charterhouse, Efya continued to record songs and perform at local gigs. She changed her stage name from Miss Jane to Efya prior to starting her solo career. In an interview posted on Modern Ghana, Efya said: “When I decided to go solo, it made sense at the time to reinvent myself in every way, I wanted a name that was African and unique but at the same time relevant to me in some way. My manager Jimmi helped me come up with the name Efya”.  In 2011, she signed a recording deal with One Nation Entertainment.

T.I.N.T, an acronym for This Is Not The Album, was released on November 11, 2013. The mixtape, which comprises 13 tracks, was released as a precursor to the upcoming album Love Janesis. It was also released for free digital download, and was supported by the singles “Getaway” and “Best In Me”. On November 10, 2011, Efya released the mixtape’s lead single “Getaway”. The music video for the single was shot and directed in and around Accra by Sony Addo. On February 14, 2012, Efya released the mixtape’s second single “Best In Me”. The music video for the single, uploaded onto YouTube on September 20, 2013, was directed by OJ of Big OJ Films. The mixtape is composed of songs that were released between 2011 to 2013. It features a guest appearance from Black Magic. In the aforementioned interview with ARISE, Efya said that the overall theme of the mixtape is Love. She also said that the mixtape is about the good, the bad, the ugly, the heartbreak, the pains, as well as the highs and lows of life. On February 14, 2013, Efya released “Body” as a cover of Chris Brown’s single “Don’t Judge Me”.

Efya released her debut studio album, Janesis, on April 22, 2016. The album was initially slated for release in the third quarter of 2013. However, the release timeframe was postponed to February 2014. On January 11, 2014, Efya released the album’s lead single “Forgetting Me”. The song was met with great reception. A writer for Modern Ghana said: “Forgetting Me is a powerful ballad that tells the story of love and heartbreak. The ascending singer-songwriter delivers every note with precision and passion and the song marks the culmination of personal and professional growth for Efya as she continues to demonstrate her musical aptitude.” During an October 2013 interview with Alexis Stephens of MTV Iggy, Efya said that the album will contain many love songs. She also said that the album will explore the topics of hate and pain, two universal themes associated with love. Moreover, Efya stated that the album draws from her personal experiences.

On July 16, 2014, Efya released “One of Your Own” as the album’s second single. The song features vocals by Bisa K Dei. Efya initially wanted to release “Gingam Too Much” as her second single but after discussions with her team, she decided to postpone the release of the aforesaid single.

On December 26, 2014, One Nation Entertainment eventually released “Gingam Too Much” as the album’s third single; it was produced by Kaywa. The music video for “Forgetting Me” was uploaded onto YouTube on February 5, 2015; it was directed by Prince Dovlo of Seven Streets Entertainment.

In an interview with Danai Mavunga of ARISE magazine, Efya described her sound as “Afro soul” with a hint of pop. She said that her sound fluctuates depending on how she feels and who she’s working with. In another interview posted on Modern Ghana, Efya cited Kojo Antwi, Aretha Franklin and The Temptations as her key musical influences, stating that she was into old school jazz and highlife growing up.

Efya is an official ambassador for the Awal Children Of The Future Foundation (ACOTF), a foundation aimed at helping victims of physical and emotional trauma, particularly orphans and street kids. The foundation was founded by Posigee, a Tema-based record producer famous for numerous tracks including “Sister “, “Injection” and “Issues”. The foundation consist of eight musical ambassadors, including Sarkodie, Ruff N Smooth and Yaw Siki. A theme song titled “This is Who I Am”, featuring the foundation’s ambassadors, was released in 2012. The song was written by Chase and produced by Posigee. It is available for purchase on several digital platforms, including iTunes and Amazon. All of the proceeds from the digital sale of the song goes to the ACOTF Foundation.