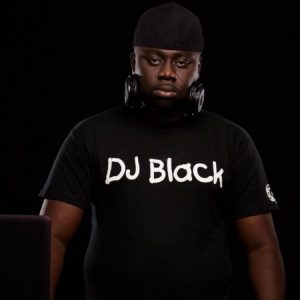 The hardest working DJ in Ghana. With a a BA in Mass Comm. (UG/G.I.J) ,a diploma in Public Admin (UG), and the Host DJ for all major shows in Ghana including the Ghana Music awards ; he is an ideal role model for the youth. Rothmans Best DJ in West Africa 2001 , 2009 Red carpet awards independent artist and DJ award winner. . Check him out every weekend on Joy99.7 Fm in Accra or you could just find him hosting a show or voice booming in your ear or making it happen on of the many parties or clubs in Africa. There’s more that meets the eye and Dj Black has got it.

DJ Black started to DJ in 1993 in School, He joined Prime Cut in 1995 and worked alongside veteran Ghanaian DJS like Azigiza Jnr,DJ Magic Sam DJ Rab,DJ Kakra,etc.In 1997 DJ Black moved on to manage Dope Rhyme Studios in Nima giving rise to his clench on hiphop in Ghana.He became the DJ for the streets as he made mixtapes and spinned for Hiplifers as VIP,Bukbak,Obrafuo,etc and being in the forefornt of people who strengthened the movement HIPLIFE.
DJ Black started radio in 1997 at Radio Univers host in Space Jam and gave birth to his controversial Hiphop Show which is still airing.

DJ Black won the Rothman’s West African DJ Championship the same year and went on to release the TOONTOOM MIX VOL 1 the following year.He has become the Voice that heralds a show,it’s easy to notice his creative skills on a radio advert and that quickly became a skill that only his Blackness could have.Quickly Jumping on the technology ,he released the Afrohop series of mixtapes,Ghana Club Bangerz series,etc.He has also hosted Coptic’s Blackstarline mixtape with Lee Kasumba of South Africa. DJ Black was the first judge to be chosen for the first ever emcee battle in Africa. Being recognized for his skill,Mr Black makes frequent appearances at DejaVu night club,Liberia,Moloko(now Hush),Johannesburg and several clubs in Africa.

After University ,DJ Black got noticed by Gabby Adjetey and started working with JOY FM hosting the Open House Party,Joy Beach Jam,Weekend Warmer and other shows in 2001

DJ Black on JOY FM in Accra,Ghana is without a doubt something unforgettable as he controls weekend radio in the city of Accra,the Weekend Warmer which has throwbacks and guest spots has a mature audience entertained whilst the OPEN HOUSE PARTY on Saturdays keeps the Youth awake.DJ Black has hosted Events ,Concerts,Album Launches,Tours,Clubs,Mixtapes,etc and is the voice of the Youth in Ghana.

In 2010,DJ Black formed TOONTOOM the brand.With Toontoom Agency Studios at Kokomlemle ,DJ Black has expanded the brand as a voice over artiste and a mentor.

In 2011,DJ Black performed on Big Brother Africa:Amplified and won the Best Radio DJ in Ghana,adding on to 2010’s Africa’s NO 2 Top Radio DJ of the year and the 2010 Red Carpet award from Sniper Squad DJS.

You can find out more from His Blackness everyday by listening to his podcast,DJBLACK’S PODCAST on itunes or downloading the Dj Black app.