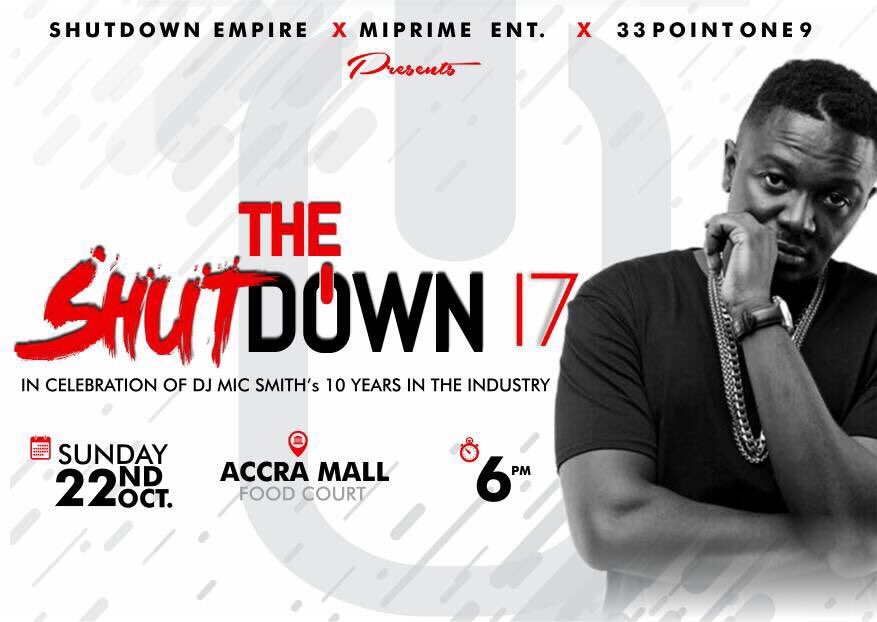 Sunday October 22nd will be etched in the memories of many Ghanaians as a tall list of top stars converge at the Accra Mall food court to party and pay tribute to the contribution of DJ Mic Smith to the Ghanaian and international music industry.

For the past decade, Mic Smith known in real life as Michael Owusu-Smith has demonstrated a monstrous mastery of his craft. His flawless control of the turntables has endeared him to the hearts of many in Ghana and across the shores of the country. So on an occasion to recognize his efforts in putting the country on a different pedestal, “A” list DJS like Andy Dosty, DJ Kess, Nigeria’s finest, DJ Neptune, DJ Mensa, Killa Fingers, DJ Vyrusky are amongst the DJs on rotation to celebrate with him in mega style.

The Shutdown King as he is affectionately called has paid his dues both to the music and Djing fraternity.

So on the night, expect artiste like Mr. Eazi to take things easy as he delivers explosive tunes from his arsenal. E.L, A.I, Magnom, Kojo Cue, are also part of a tall list of performers to thrill patrons at the free concert dubbed SHUTDOWN 2017.

Micheal Owusu known as DJ Mic Smith is an event, club, radio, mixtape and artist DJ and also an entrepreneur from the republic of Ghana.

Mic began DJing by “accident” when looking for a job over 10 years ago, where he had an embedded passion for music and allowed this to take more of a forefront in his life than it had previously. At Hot fm (93.9) in the early stages of 2008, he started as a radio presenter who presented the entertainment news on the Drive Time Show hosted by Okyeame Quophi.

Within a year of life in the media world, Mic began spinning. His talent was pushed to the next level, when he became resident DJ at one of the most recognised clubs in Accra, Rockstone’s Office known to many as Django. Over the years he was the main focus entertainment at the club and his talent on the decks quickly earned him the nickname ‘The Shutdown King’ exposing him to many opportunities including national and international gigs.