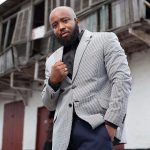 Following weeks of much anticipation, Trigmatic finally dropped his new 6-track EP over the weekend to mark his 36th birthday. In a series of posts and tweets, he highlighted the inspiration for the new EP – ‘’Pipeano’’ spring from his recent trip to Takoradi. Apparently, ‘’Pipeano’’ is the name of a popular junction in the oil city of Takoradi.

‘’Pipeano’’ reflects themes of love, frustration, resilience and hope amid it’s creditworthy production. 5 of the EP’s 6 songs were produced by Takoradi-based producer, Elorm Beat, with the remaining song credited to Swit.

Trigmatic’s new record also features some of Takoradi’s finest musicians. Fans will hear the likes of Pappy Kojo, Township, Ayma, Ayesem and another solid collaboration with Worlasi atop a song titled, ‘Diplomatic Teef’.