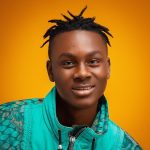 On a dancehall rhythm with sterling witty lyrics, the dancehall star eliminates all competition in the music industry, he also affirms that he is only bad musically and should not be associated with crime.

Ridwan Abdul Rafiu, popularly known as Larruso in October 2021 released his experimental EP which he titled “New Gen”, a project to discover himself more and also liberate the voice of the newer generation. The young talent believes the new crop of talents deserve to be helped and supported all the time. “New Gen” is surprisingly exceeding its purpose.

Listen to “Send Dem” by Larruso, with production credits to Beatz Dakay below;