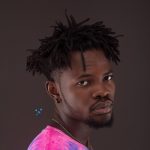 Fameye leaves his comfort zone as he releases his debut album ‘Greater Than’. The album which features the Manifest, Bisa Kdei, Pappy Kojo, Kidi, among others, is set to break barriers with it’s diverse style of music according to Fameye.

When asked about the reason behind the title of the album, Fameye said, “Often when I do a song, I do use the term “More than,” so the upcoming album will be greater than the “More than” I have been known for.”

“So with my son on the art cover it means both of us are great,” he added.

The 10-track album has songs like “Asem”, “My Love”, “Unbreakable”, “Dey For You”, “Bibii”, “Streets”, “Agoro”, “247”, “Choices” and “Fly Away” with astute producers including Liquidbeatz, DJ Breezy, Chesenbeat, Beat Master, Peewezel, Senyocue, Tubhanimusik, Johnny Blaze & Stadec involved in the production.

STREAM ‘Greater Than’ on your favorite music streaming service: https://music.empi.re/greaterthan