In her somewhat satirical music video, Kwesi represents a playboy who has multiple lovers, all of whom know about the others, but are still in love with him.
Production credits to Jayso. 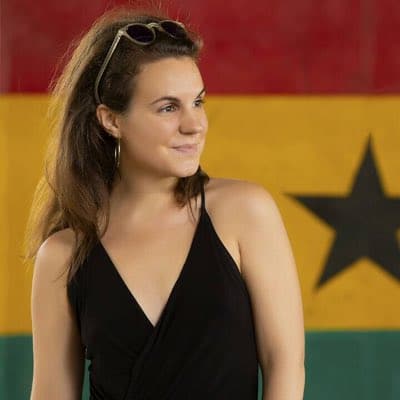 Allisn is a singer/songwriter who grew up in Austria and Israel/Palestine. Having grown up amongst many Ghanaians and Nigerians in Austria, Allisn was exposed to African culture and music at a very young age.

After traveling around the Caribbean and South America for over a year, Allisn felt a very strong pull to move to Ghana, and less than a year later, moved to Accra with the desire to make an Afro-fusion album. Allisn relocated to Ghana in July, 2017 and quickly immersed herself into the music scene, working with top producers, including Jayso and Unklebeatz.

With a love for creating smooth renditions of popular dance songs, Allisn initially recorded a number of mashups of various popular Ghanaian songs that gained a lot of positive traction. On October 9, Allisn released her first original track titled “Kwesi.”

With smooth and sultry vocals, risqué and intriguing lyrics, and a catchy and danceable beat, Kwesi is sure to be the newest hit to reach Ghana.

Allisn will be releasing her debut 5-track EP titled “Circa 1993” on November 11th , each song reflective of her experiences and observations in Ghana from the perspective of a foreigner.

Allisn is a gifted lyricist and creates songs that combine a powerful message with smooth vocals and a catchy beat.

Be sure to follow Allisn’s journey and keep up with her whereabouts on all social media platforms.

Connect With Allisn via Social Media