VIDEO: Herman Suede - One By One

“One By One” quickly follows earlier outdoored singles “Free” and “Star” both released this year.

Produced by S.Kool Beatz, the love-themed afrobeat jam is predominantly written and performed in English, the song’s bridge however sees Herman transition to singing in Ga (his native Ghanaian dialect), perhaps in an attempt to express the depths of his affection. 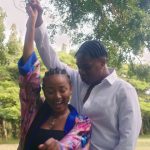 VIDEO: Herman Suede – Meant For You